A festival with harder sounds

On October 30, 2021, the Neustadt-Glewe airfield will become a Hardstyle Temple. For the first time Brennan Heart, the icon and the figurehead of the “harder styles in music” is coming to Meck-lenburg-Western Pomerania with his I AM HARDSTYLE. From 8 p.m., Mr. Hardstyle and 10 other DJ followers will shake the walls of the MEGA ARENA tent with the hardest Hardstyle bass.

BRENNAN HEART is the figurehead of the hardstyle scene. The Dutch DJ runs his own label with WE R Music and plays in front of thousands of people at the big festivals from Tomorrowland to Electric Daisy Carnival and of course at all harder-paced festivals such as Qlimax, Defcon 1 or Hard Bass. With his unique music and his I AM HARDSTYLE concept, Brennan Heart has become a true legend of the scene. With I AM HARDSTYLE, Brennan Heart brings fans of harder styles together worldwide and fires off a show experience of the extra class! His fans can now experience this for the first time in Neustadt-Glewe.

Now it is clear who the Dutchman will bring to the AIRBEAT ONE area and that develops to a true festival line-up. With ZATOX, the hardstyle legend from Italy will come. His music label Italian Hardstyle paved the way for the harder sounds behind the burner. The first hardstyle act ever on the Tomorrowland Mainstage is also coming on October 30th: COONE. The Belgian is the figurehead of the Belgian hard style and has already worked with Dimitri Vegas & Like Mike, Bassjackers and Linkin Park. FREQUENCERZ have already played at all the important hardstyle major events and regularly have songs in the Q-dance Top 10. After their grandiose performances at the AIRBEAT ONE festivals, they are now coming to the MEGA ARENA.

With AUDIOTRICZ, B-FRONT and D-BLOCK & S-TE-FAN, other hardstyle greats from the Netherlands are coming to the I AM HARDSTYLE event. CLOCKARTZ, REBELION, THE PITCHER and THYRON complete the line-up for the mega-event on October 30, 2021. The stage will be hosted by MC VILLAIN, whom many already know from the AIRBEAT ONE Festival.

AIRBEAT ONE presents I AM HARDSTYLE 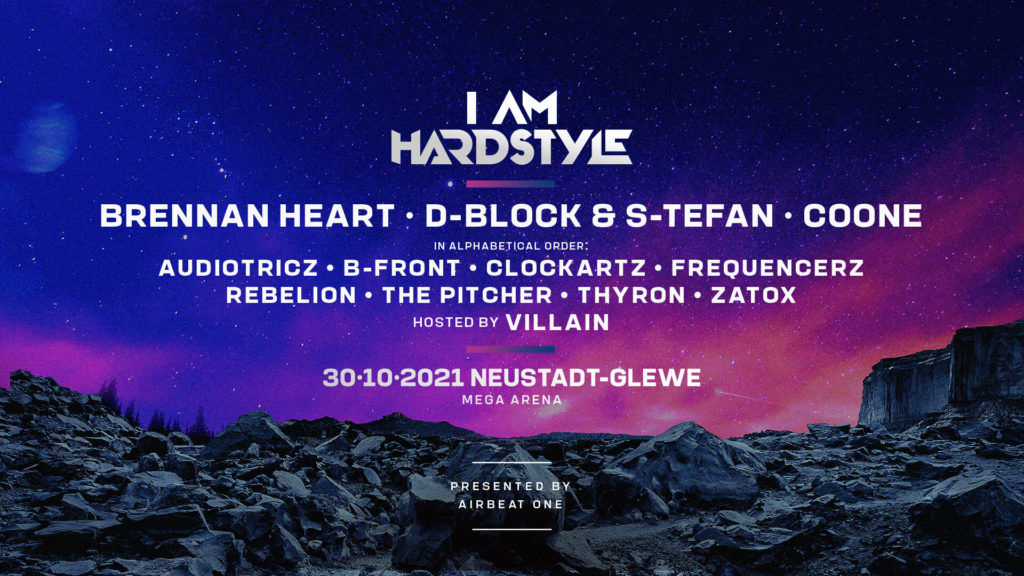